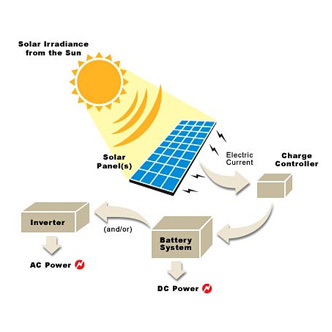 What is Solar Energy?

Solar energy is radiant energy that is produced by the sun. Every day the sun radiates, or sends out, an enormous amount of energy. The sun radiates more energy in one second than people have used since the beginning of time. Only a small portion of the energy radiated by the sun into space strikes the Earth, one part in two billion. Yet this amount of energy is enormous. Solar energy is also absorbed by plants, the land, and the oceans. The rest could be used to supply our energy needs. The public and world governments remained largely indifferent to the possibilities of solar energy until the oil shortages of the 1970s. Today, people use solar energy to heat buildings and water and to generate electricity.

Solar Energy and the Environment.

Photovoltaic comes from the words photo meaning 'light' and volt, ameasurement of electricity. Sometimes photovoltaic cells are called PV cells or solar cells for short.Using solar cells to convert light into electricity. Batteries are used to store the energy that is not needed immediately. Solar panels can be used to power or recharge portable devices.

** The installation is not limited to the locations. It can be installed in any location, as the Solar Panel is not large. Furthermore, it does not require facing the sun. ** The performance of the Air Conditioner will not be affected by the weather, no matter in the cloudy, rainy day or in the sunny day, or in the evening, the effect would be the same. It absorbs the heat and the radiation. ** It can perform normally between the Temperatures -25degree Celsius and 54 degree Celsius. If the Temperature is over 50 degree Celsius, the Compressor will keep itself in a state of rest for the protection. When the Temperature returns to normal (-25 degree Celsius to 50 degree Celsius) it will continue to work automatically.